My Experience at the DAV MUN!

“And the best delegate award goes to the delegate of UK…”, was my moment of utter shock!
Well, this doesn’t happen in many MUNs to me, even in those that I win. This was only because
I was up against undoubtedly one of the most experienced delegates in the Hyderabad MUN
circuit; one with over 39 MUN experiences, was the Chairperson in DRSMUN 2K19, and an
extremely intelligent friend. People say hard work really pays off. I now do second that notion.
You must be thinking that I had been researching for days and days to reach this result, but in
fact, I had registered only two days before the MUN deadline. Well, that is not something I would
recommend! To make up for the delay I had nights that lasted till almost 1AM or 2 AM
researching, with the best partner any MUNer or researcher can have – a can of Monster (BTW,
believe me, you drink Redbull, you’ll doze off straight away).
This is undoubtedly the most productive MUN I’ve been to as it has opened a whole other
side of the United Nations to me – the ‘technical part’ as I call it. One where you dig up
resolutions and treaties signed in the 1940s and 50s and find articles and clauses that the
opposing party violates and retort to them with evidence or loopholes and interpretations that
can be used to justify and defend your side. The agenda of the Committee – The Security Council
– I participated in was ‘The Soviet invasion of Afghanistan.’ And one thing that made the most
challenging committee, the Security Council even more challenging was that it was a historic
Security Council, with the freeze date being 4th January 1980. (In real life, the Security Council
meeting was called on 5th January 1980).
So, what that means is there are 0 Reuters reports or UN reports up to this date, as in the
simulation the Soviets had just invaded Afghanistan around 6 months back, and there were no
huge advancements made by that time, except in the President’s House. So basically, the soviets
invoked Article 51 of the UN charter, one of the most widely used and controversial article
which allows “collective self-defense” and the Afghanistan government was under threat from a
militant group, the Mujahedeen – the Soviets intervened. They staged a coup and installed a
Soviet-backed president and killed the previous President who had also just killed the previous
Socialist President who also came to power in 1978 after a coup. Hilarious!!!
Well, that’s more or less what MUN-ing is all about. The MUN provides a platform for me to
meet new people and make new friends – people with diverse lives, and different perspectives
and high maturity. The icing on the cake is the Socials – with the rappers and beatboxers and the
DJs, it is the part that all of MUNers look forward to, to close our two-three days of formal
experience, let loose and enjoy.
#DemoracyDiesInDarkness #DAVMUN

On 23rd November 2019, we at Suchitra Academy celebrated our Founder’s Day with the Chief Guest as Ms. P.V. Sindhu, India’s Golden Girl! We thank Eenadu, Vaartha, Andhrajyothi, Andhrabhoomi, Andhraprabha, Sakshi, Namaste Telangana, Mana Telangana, Manam, Hindi Milaap, and many others from the press and media for covering our Founder’s Day event. Here is a gist of what they covered regarding the event and the school.

The event started with lamp lighting followed by a few words by the Chief Guest. P.V. Sindhu stating that children should not only study, but also should take part in extra-curricular activities and sports.

The event was characterized by drama, singing, and dancing. The students showed their talents in all categories and activities. Not only students but also their parents were given prizes for pre-organized essays. The students who won awards in sports were given prizes by the Chief Guest Ms. P.V. Sindhu. The cultural dances, in particular, were very attractive to the audience and media. Parents found the “Arabian Nights” performance to be very entertaining and the musical drama “Jack and the Beanstalk” enchanted the audience the most. One of the news sources, Sakshi, in light of Suchitra Academy’s 9th Founder’s Day, stated: “Wonder Kids, Thunder Dance” as the headline for their article. Approximately, 1600 parents and 800 students have attended the event. The students of the 1st to 6th standard had participated in the event’s cultural performances.

P.V. Sindhu congratulated all the students, teachers, and management for 09 glorious years of Suchitra Academy and appreciated everyone for their efforts, with special mentions to the Founder Mr. Krishnam Raju, Chief Mentor Mr. Praveen Raju, Director-Principal Mrs. Renu Shorey, and Vice-Principal Mrs. Deepa Kapoor and said that she was reminded of her school days while watching the performance.

PV Sindhu also said that she considers Suchitra Academy as her second home as she visits the school regularly for her fitness training and workouts.

Here are a few more news clippings of the event: 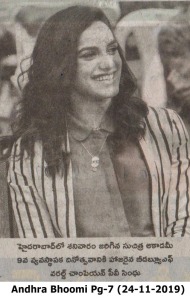 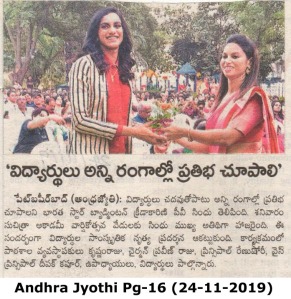 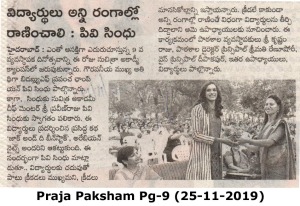 Food battles can be epic. They can also slowly drain a parent’s will to make sure their child eats well. Here, a few moms share their tried-and-true ideas for sneaking veggies into snacks and meals for their picky eater. 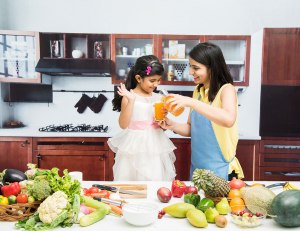 “It’s not all that clandestine, but I put mashed veggies in my son’s scrambled eggs in the morning. I’ve done cauliflower, squash, and broccoli (not all together) — he seemed to like the added texture and eats it regularly. I also tried bell pepper strips, but those totally bombed. For the record, I’d encourage people to add extra-yummy stuff too. I add lemon ricotta to the broccoli eggs — it’s delicious. Why not add extra-yummy stuff, in addition to extra-healthy stuff? I started doing this because I hate to throw out food but then realized it was a way to get some extra veggies in there.”

“My favorite sneaky kid recipe is for smoothie popsicles. You can sneak pretty much anything healthy into a smoothie, and when you make it into a popsicle, it becomes a portable, nutritious snack. I usually add plain yogurt and soymilk, fresh or frozen berries, and bananas. Pour the mixture into ready-made popsicle molds, and you have an easy snack that can even be breakfast to go!”

“My kids love toasted wheat germ sprinkled on their ice cream. I know ice cream is not health food, but when they have it as a treat, they might as well get a touch of something healthy along with it. I was laughing last night when they were arguing about who got extra wheat germ on the ice cream [because] they have no idea it’s good for them. Flaxseed is another power food that’s easy to add to everything, including smoothies, oatmeal, and yogurt.”

“The only thing that works for us is juicing — yes, I juice a bunch (literally) of kale, two carrots, 1/3 beet, and one to two oranges, then dilute with water (50-50 ratio). I also add a multivitamin to the mix. I’m amazed that it works because it’s an incredibly earthy-tasting juice and not very sweet at all.”

“If your kid will eat tomato sauce on pasta, it’s easy to hide veggies in [the dish]. Either chop or puree mushrooms, onion, carrots, celery, and spinach and add to the sauce.”

“Sweet potatoes might be one of the only veggies that are slightly easier to get a picky eater to ingest. But if yours still won’t, try slicing them into fries and seasoning with salt, or baking and pureeing them to add to a pancake mix for breakfast.”