Here we are once again with news from the Suchitra campus.

News from the PRE-PRIMARY

We are done with our two weeks of Pre-primary, Yahoo!!! It has been a busy month as our kids continue to adjust and learn classroom routines. The first few days kids missed home, but we are amazed at the progress each child has made as they transition into the full and rigorous day of school. We look forward to an exciting school year ahead.

WOW! Now our Pre-primary classes have special names. Every classroom in the Pre-Primary block has been named after a flower. On Friday 19th June, children chose a name for their class and now, are being called by their new names. Nursery A is Tulips, Nursery B is Orchids, Jr. A is Daffodils, Jr. B is Carnations, Sr. A is Buttercups, Sr. B is Sunflower and Sr. C is Dahlia.

On Monday 22nd June the theme “Habitat on Land and Water” was introduced. We dove into the fascinating world of amazing animals and their Habitat. The children’s natural attraction to animals as well as curiosity about animals keeps them captivated and engaged throughout. Children are learning to identify various animals, their young ones and their habitat. They are also learning why those animals fit into that habitat.

On Wednesday 1st July Sr. KG kids went around the campus with magnifying glass, hunting for creepy crawlies. They observed various insects very closely using the magnifying glass. At Pre-primary we are having fun learning letter sounds, forming new words and learning tricky works through various games, songs and rhymes. We are also continuing to have fun counting and playing number games.

Please send only one snack that is a reasonable amount of food for your child, avoid junk food. Snack time lasts approximately ten minutes. Please take this into consideration when you are deciding how much snack to pack for your child.

Please label all the items, specially the shoes with white ink, as kids take off their shoes during swimming and gymnastics.  They tend to get mixed up.

Spend few minutes each day reviewing alphabet, sounds and words. Search for letters / words in books and magazines and use them to write sentences.

Have your child practice putting on her/is own shoes and zipping her/is own bags.

Have your child practice cutting with a safe scissors holding the thumb up and using opposite hand to rotate the paper.

News from PRIMARY AND MIDDLE SCHOOL

An inter-class DISPLAY BOARD COMPETITION from grades I to X was held on Tuesday 23rd June. All classes were done up in a very tasteful manner and the effort of the students and their mentors was evident. Each and every classroom had a theme which was the backbone of the chart display. Some of the interesting themes were puppets, chess, evolution of camera, sports etc.

The winners of the competition are 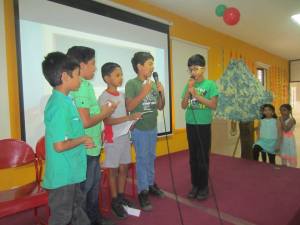 On Tuesday, 23 June 2015, the students of Grade III A conducted a Special Assembly on the topic
“HONESTY IN WORDS AND DEEDS”. It started with a small video on honesty and the children spoke on the virtues of being honest. The students also enacted a small skit on Gopala Krishna Gokhale the  freedom fighter who is known for his truthfulness and sincerity.  Finally, the assembly ended with taking a pledge of being truthful to one self and to others

On the occasion of World Music Day which is celebrated the world over on 21st June a MUSICAL ASSEMBLY was conducted on Wednesday, 24th June. The budding musicians of grade IX and X displayed their expertise not only in playing musical instruments but also in singing. They presented an informative PPT which gave an insight into the way this day is celebrated all over the world. Dexter sir, Chaitanya Sir and Swarnika Ma’am also sang songs and their musical performance mesmerized everyone. It was a wonderful assembly which left everyone wanting for more.

As a special activity on Thursday, 25 June there was a House Meeting of the four houses. STUDENTS WERE NOMINATED for various school portfolios like school captain, sports captain and various house captains and prefects. Various houses nominated these students and the final appointments would take place after another round of selections. 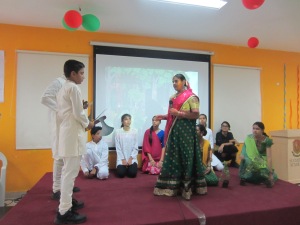 On Wednesday, 1st July grade IXB presented an interesting assembly on VAN MAHOTSAV. The assembly started with a PPT where the significance of this event was highlighted. Information was given about the various programs undertaken by the government. The students enacted a short skit which depicted the Chipko movement. The assembly ended with a song.

As a special activity, grades I to III had COLLAGE MAKING on Van Mahotsav on Thursday, 2nd July. The mentors and students had a brainstorming session and came up with some innovative and creative

collages. It was not only a fun activity but also a learning experience for the students. All the students
were proud of their handiwork and posed excitedly with their masterpieces.

On the same day the nominated office bearers spoke about their hopes, views and aspirations in the assembly and made their pitch for being elected for the posts.

3rd July, Friday, Mr. Arjun Puri Deputy Director Admissions, Jindal Global University, had a session with parents and students of grade VIII, IX and X on various courses and programs available to children after passing out from school. He explained the reach and potential of Liberal Arts programs being conducted by various universities. His passion and views impressed all of us.

Dear Parents as we begin preparations for Language week, I shall be sending you helpful tips to prepare your kids for Recitation, Oration or Extempore’. It is our endeavour to make each child participate and we seek your whole-hearted support in this. Final selections would be after a class elimination round, so preparing your child well would matter.

Please note : we are going on a Three ‘J’ trip ( Jaipur, Jodhpur, Jaisalmer) during the Dusherra break. The consent slips have been sent to you. The travel is by flight both ways from Hyderabad to Jaipur and it is imperative that we book early for good discounts. Hence do take a decision quickly and let us know. This is going to be a real trip of discovery.